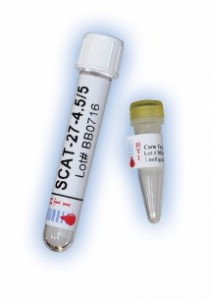 The graph illustrates the effect of added CTI on the PT and aPTT of normal human plasma.  CTI was added to normal pooled human plasma to various final concentrations, and the mixtures were allowed to incubate for a brief period on ice prior to conducting the assays.  The PT remains unaffected while the aPTT doubles with the addition of approximately 60 micrograms of CTI per ml of plasma.

Corn trypsin inhibitor (CTI) is a small protein that is localized in the kernels of most species of corn. CTI is not only an inhibitor of trypsin, but is also a specific human factor XIIa inhibitor when tested in blood clotting experiments. The inhibitor forms a one-to-one complex with either trypsin or factor XIIa, and when added to plasma, prolongs the activated partial thromboplastin time without affecting the PT assay. The specificity for factor XIIa makes the inhibitor useful for the segregation and study of tissue factor (TF) dependent coagulation reactions.

The use of CTI to study TF-dependent reactions has been documented in literature.  Studies indicate that suppression of the contact pathway of coagulation is essential when attempting to perform TF-dependent assays in whole blood or plasma samples. The addition of CTI at the point of sample collection prevents activation of the contact pathway during subsequent sample processing steps, thus reducing in-vitro artifact. The most common use of CTI is associated with thrombin generation assays when attempting to work at low TF concentrations.  HTI’s CTI product is performance tested for this specific application.

The protein is comprised of 112 amino acids which yields a calculated molecular weight of 12,028. The calculated molecular weight and that which has been determined by sedimentation equilibrium analyses of the purified protein (12,500) are in good agreement. A comparison of the amino acid sequence of CTI to that of other trypsin or serine protease inhibitors reveals little or no similarities.

CTI is purified using a combination of published procedures. To begin the purification process, CTI is extracted from the kernels of fresh sweet corn into a physiologic buffer. The extract is then de-fatted using acetone, and the protein is further purified by employing gel filtration and ion-exchange chromatography. The final CTI preparation appears as a single band by SDS-PAGE analyses under both reducing and non-reducing conditions.

Preparations of CTI are tested for the ability to prolong the aPTT assay without affecting the PT assay. The specific activity of each lot of CTI is determined, and one unit is defined as the amount of CTI required to double the aPTT of normal human plasma.