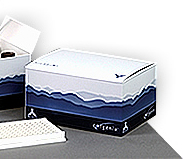 The REAADS vWF Activity test kit is an ELISA for the quantitative detection of von Willebrand Factor activity in citrated human plasma. The assay utilizes a purified murine anti-vWF monoclonal antibody which recognizes a functional epitope on the vWF molecule to assess vWF activity levels.

Materials required but not supplied

The REAADS von Willebrand Factor Activity Test is an ELISA for the quantitative detection of vWF activity in citrated human plasma. The assay utilizes a purified murine anti-vWF monoclonal antibody which recognizes a functional epitope on the vWF molecule to assess vWF activity levels.

Diluted citrated patient plasma and controls are incubated in microwells coated with monoclonal capture antibody allowing patient vWF to bind to the surface. Following an incubation period, the wells are washed, and a horseradish peroxidase (HRP) conjugated anti-human vWF detection antibody is added. After incubation, the wells are washed, substrate is added, and color development is measured in a spectrophotometer at 450nm following the addition of a stop solution. Patient vWF:Act levels are determined from a six-point curve prepared from the reference plasma provided in the kit. Total incubation time is 40 minutes at room temperature.

1. Remove any microwell strips that will not be used from the frame and store them in the bag provided.

2. Assay each reference plasma dilution in duplicate. Duplicate determinations are also recommended for patient and control samples. One well should be run as a reagent blank; sample diluent without plasma is added to the well as explained in step 6 of this section. This well is treated the same as a patient sample in subsequent assay steps. A water blank well should be included with each plate; it is to remain empty until 200 µl of reagent grade water is added at the completion of the assay, immediately prior to reading the plate. The water blank well is to be used to zero the plate reader.

3. Using the Reference Plasma provided with the kit, prepare five reference plasma dilutions as described below.

5. Add 100 µl of the dilutions (reference plasmas x 5, patient samples and controls) to the appropriate microwells.

7. Incubate 15 minutes at room temperature. After the incubation is complete, carefully invert the microwells and empty the fluid. Do not allow samples to contaminate other microwells.

8. Wash 4 times with working wash solution (PBS/Tween 20). Each well should be filled with wash solution per wash. Wash solution in the empty well intended to serve as a water blank will not interfere with the procedure. Invert microwells between each wash to empty fluid. Use a snapping motion of the wrist to shake the liquid from the wells. The frame must be squeezed at the center on the top and bottom to retain microwell modules during washing. Blot on absorbent paper to remove residual wash fluid. Do not allow wells to dry out between steps.

10. Incubate for 15 minutes at room temperature. After the incubation is complete, carefully invert the microwells and empty the conjugate solution.

11. Wash 4 times with working wash solution (PBS/Tween 20) as in step 8. Wash solution in the water blank well will not interfere with the procedure. Use a snapping motion to drain the liquid, and blot on absorbent paper after the final wash. Do not allow the wells to dry out.

12. Add 100 µl Substrate to each well (except for the water blank well) and incubate for 10 minutes at room temperature. Add the substrate to the wells at a steady rate. Blue color will develop in wells with positive samples.

Precision within a lot was determined by testing 14 commercially prepared plasma samples, in duplicate dilutions, across three plate lots. The mean CV for duplicates over three plate lots was 5.2%. The precision between lots was determined by comparing the values recovered for eight different control samples on two lots. Each of the eight samples was tested in duplicate in each assay. The mean inter-assay CV was 8.3%. The lower limit of detection, as calculated from the reagent blank plus 3 standard deviations, using 3 kit lots, was 3.1%.

von Willebrand Factor Antigen (vWF:Ag or Factor VIII-related protein) is a plasma protein found in circulation combined by non-covalent interactions with Factor VIII (FVIII:C), a pro-coagulant protein also known as the anti-hemophilic factor. These two proteins show distinct biochemical and functional properties as well as different antigenic determinants; their plasma levels may vary independently of each other. Deficiency of FVIII causes classic hemophilia while deficiency of vWF causes vonWillebrand disease. Most of VWF:Ag is synthesized and stored by endothelial cells while 15-20% is synthesized by megakaryocytes and stored in circulating platelets. A vWF:Ag unit has a molecular weight of about 250 kD and tends to polymerize in circulation, with multimers ranging in size from 850 kD to as large as 15×106 D.

vWF plays a very important role in hemostasis; it protects FVIII from proteolytic cleavage in circulation and helps platelets to aggregate or to adhere to sites of vascular damage. The in vivo half-life of FVIII:C without vWF is shortened from 10-12 hours to a few minutes. These two mechanisms prevent bleeding. von Willebrand disease is characterized by a deficiency or defect of VWF. Decreased vWF activity in plasma can be the result of low concentrations (quantitative or type I defect) or functional changes of vWF (qualitative or type II defect). von Willebrand disease is the most common inherited bleeding disorder and is characterized by easy bruising and prolonged bleeding from mucosal surfaces. The prevalence of Von Willebrand disease has been estimated to be 1-3% of the general population. Greater than 70% of Von Willebrand disease patients have a type I deficiency while approximately 20% have a type II deficiency.

The laboratory diagnosis of von Willebrand disease may require both quantitative and qualitative (functional) determinations to differentiate the two predominant subtypes of the disease, type I and type II. The classification of Von Willebrand disease into subtypes is important in determining the course of clinical treatment.