Neutrophil recruitment to the site of inflammation is one of the first lines of defense against infection. After internalization of a microorganism by phagocytosis, neutrophils release reactive oxygen species (ROS), antimicrobial peptides and proteases into the phagolysosome. This process is an important part of innate immunity and ensure the removal of pathogens and cellular debris.

Neutrophil serine proteases (NSP) are a family of proteases extensively involved in the elimination of pathogens and amplification of inflammatory pathways.  NSP include neutrophil elastase (NE), cathepsin G (CatG), and Proteinase 3 (PR3) are primarily degradative enzymes which act both intra- and extra-cellularly.  NPSs are found in one of three forms: as the active enzyme, inactive zymogen or inhibitor bound enzyme.  They are synthesized during neutrophil differentiation as inactive zymogens that are further processed by cathepsin C at the amino terminus to become active.  During neutrophil degranulation, NSPs from granules are released into the extracellular space where NSPs have a broad and overlapping range of substrates, including bacterial proteins, host cytokines, and host extracellular matrix (ECM) proteins.  In addition to their enzymatic activity, NSPs can also activate signaling events leading to downstream cytokine release and chemokine production.

α-1 Protease Inhibitor (α1PI), otherwise known as α-1-antitrypsin or SERPINA1, inhibits a wide range of serine proteases including NSPs. The second order association rate constant (kass) for α1PI with PR3 is 4.5 x 104 M-1s-1 which is approximately 100 times less than with NE. This suggests that PR3 may play a more important role in inflammatory damage when both are released.

Monocyte neutrophil elastase inhibitor (MNEI), also known as SERPINB1 inhibits PR3, NE and CatG. The kass of MNEI with PR3 is 3 x 104 M-1s-1. SerpinB1 is found in the cytoplasm of neutrophils, acting as a protease shield, protecting these cells from their own granular proteases.

Canonical inhibitors, such as elafin and secretory leukocyte protease inhibitor (SLPI) are found in high quantities in bodily fluids. They can inhibit NSPs in addition to having antimicrobial activities. Elafin has a high affinity to NE and PR3, with inhibition of membrane bound forms (PR3m) at the surface of activated neutrophils. Elafin-PR3m complexes remain bound on the neutrophil cell surface.  Not only is PR3 not inhibited by SLPI, but it also can degrade SLPI. It is believed that this may be related to the reduced size of the S1 pocket of PR3 and unfavorable charge contacts.

α-2-Macroglobulin (α2M) is a plasma protein which controls protease activities primarily within the circulation. It non-specifically inhibits all proteases regardless of their catalytic mechanism. The kass of α2M with PR3 is 1 .1 x 107 M-1s-1 .

NSPs as a biomarkers

NSP antigen vs activity assays for detection as a biomarker:

Assessing active protease levels, particularly in complex biological samples such as sputum or bronchiolar lavage samples are problematic due to a lack of reliable and robust methodologies, which result in data with high variability and limited reproducibility.  Other commercially available antibody-based assays measure total protease levels that are comprised of latent, active, and inhibitor-bound enzymes.  Latent and inhibitor-bound forms of the proteases may have limited value regarding correlation to disease severity.

To address the issue of a robust activity-specific, a new technology, has been developed and is now commercially available from ProAxsis.   ProteaseTag™ assays capture active proteases without substrates by using a protease-specific and non-reversible inhibitor tag and subsequent antibody for signal amplification.  Like a standard sandwich ELISA with a protease inhibitor in place of a capture antibody.    The ProteaseTag™ technology allows the assays to discern between active protease and proteases complexed with inhibitors (e.g. alpha1 antitrypsin) or proteases in a latent conformation. 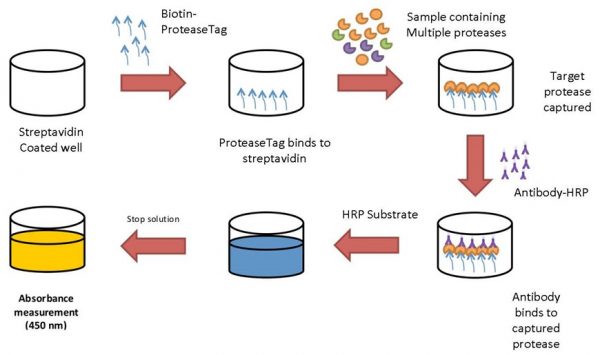 ProteaseTag assays are available to measure active NE and PR3 in a 96-well quantitative format and for NE in a lateral flow qualitative assay format.

GPA, formally known as Wegener’s granulomatosis, is characterized by necrotizing granulomatous inflammation and vasculitis of small blood vessels. In this disease antineutrophil cytoplasmic autoantibodies (ANCAs) interact with membrane bound PR3, resulting in excessive activation of neutrophils with production of reactive oxygen species and the release of granule stored proteases. Plasma levels of PR3 is significantly raised in subjects with vasculitis compared to healthy controls, however no correlations were seen with disease activity or inflammation.

The expression of PR3 on the membranes of neutrophils is increased in subjects with rheumatoid arthritis and is subsequently reduced after anti-inflammatory treatment.