Coagulation (clotting) is the process by which blood changes from a liquid to a gel, forming a clot. It potentially results in hemostasis, the cessation of blood loss from a damaged vessel, followed by repair. The mechanism of coagulation involves activation, adhesion, and aggregation of platelets along with deposition and maturation of fibrin. Disorders of coagulation can result in bleeding (hemorrhage or bruising) or obstructive clotting (thrombosis). The coagulation cascade of secondary hemostasis has two initial pathways which lead to fibrin formation:

The primary pathway for the initiation of blood coagulation is the tissue factor (extrinsic) pathway. Both the tissue factor and contact activation pathways both activate the “final common pathway” of factor X, thrombin and fibrin.

The pathways are a series of reactions, in which a zymogen (inactive enzyme precursor) of a serine protease and its glycoprotein co-factor are activated to become active components that then catalyze the next reaction in the cascade, ultimately resulting in cross-linked fibrin.

The main role of the tissue factor pathway is to generate a “thrombin burst”, a process by which thrombin, the most important constituent of the coagulation cascade in terms of its feedback activation roles, is released very rapidly. FVIIa circulates in a higher amount than any other activated coagulation factor. The process includes the following steps:

The contact activation pathway begins with formation of the primary complex on collagen by high-molecular-weight kininogen (HMWK), prekallikrein, and FXII (Hageman factor).

The minor role that the contact activation pathway has in initiating clot formation can be illustrated by the fact that subjects with severe deficiencies of FXII, HMWK, and prekallikrein do not have a bleeding disorder. Instead, contact activation system seems to be more involved in inflammation, and innate immunity. 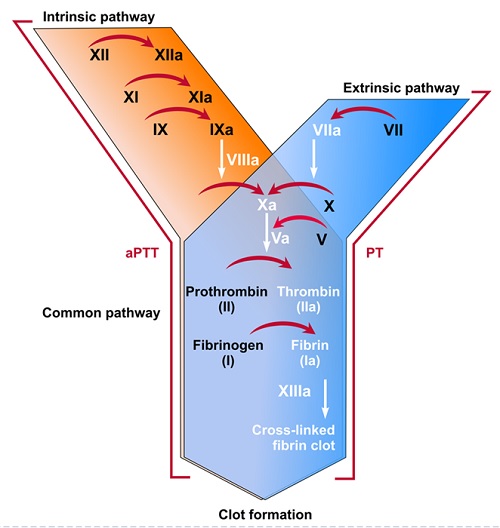 Following activation by the contact factor or tissue factor pathways, the coagulation cascade is maintained in a prothrombotic state by the continued activation of FVIII and FIX to form the tenase complex, until it is down-regulated by the anticoagulant pathways.