Back in 1980, I was exposed to my first request for a work-up on a disorder I had never experienced. A hematologist at our institution came in with a request to see if a patient in our institution may have a case of heparin-induced thrombocytopenia (HIT). I had never heard of the disorder at the time so I had to go to the old way of looking it up in Index Medicus (actual books) for a reference. I couldn’t find any lab procedures at that time in our area, so I embarked on a mission to get a method validated so I could assist this physician in treating this subject. I later found a method using light transmittance aggregometry (LTA). This procedure used normal donor platelet-rich plasma (PRP) and patient donor serum with multiple concentrations of UFH to check for an aggregation reaction. This was performed on a dual channel LTA Chronolog aggregometer. I can’t give you the reference because Pubmed only goes back to 1983 on the subject.

Then I had to learn what HIT was about. HIT is the aftermath of an immune response that is a contradiction in terms or a “paradox” of reactions. Drug-induced immune thrombocytopenia may be caused by medications like quinine and vancomycin that cause an immediate and drastic thrombocytopenia (<20 x 109/L), which causes severe bleeding. A person with a true HIT reaction may lose 50% of their platelets beginning after the start of heparin after a period of 5 days or more, but instead of hemorrhagic issues, they develop thrombotic problems.

HIT is an immune response issue caused by IgG antibodies. The antibodies evolve in response to Unfractionated Heparin (UFH) and Low Molecular Weight Heparin (LMWH). The occurrence in response to UFH therapy is 0.5-5%. In LMWH therapy the incidence of HIT is one tenth that which is observed with UFH.

HIT is a disorder that requires the physician to make quick decisions to prevent catastrophic consequences to the patient. They may use the 4Ts score along with platelet counts to guide them on whether to order laboratory testing protocols: The 4Ts is a pretest scoring system for HIT that is widely used in clinical practice. See the table below. The title refers to four characteristics of HIT:

If HIT is suspected by an elevated 4Ts score the laboratory will assist the physician in making an accurate diagnosis. This can be accomplished by a number of assays. They usually fall into two classes: immunological and functional. The following information will discuss the testing that is most commonly used in the laboratory testing for the disorder.

These methods are usually PF4 dependent with high sensitivity. HIT subjects will test 97% positive with solid phase kits. These are widely available commercially. The methods are usually batch tested due to the length of time of this method. However, weakly positive results may have low specificity. Guidelines for positivity should be set up in each laboratory setting.

-A chemiluminescent immunoassay (CLIA) is a rapid automated procedure that detects anti-PF4/heparin antibodies using magnetic particles coated with PF4/polyvinyl sulfonate (PVS). After incubation, magnetic separation, and a wash step, a tracer consisting of an isoluminol-labeled antihuman IgG antibody is added, which binds to the anti-PF4/heparin antibodies on the particles. A second incubation, magnetic separation, and washing complete the reaction. An OD reading is obtained proportional to the concentration of the anti-PF4/heparin antibodies measured. Testing is usually performed on demand with a turn-around-time of approximately 30 minutes. In a study comparing this method with the gold-standard serotonin release assay (SRA), the test correlations were outstanding in specificity and sensitivity (98.8/97.0% respectively).6

LIA is classified as an immunoassay. It differs from most other immunoassays, such as EIAs, in that the presence of PF4/heparin-reactive antibodies within patient plasma results in inhibition of particle agglutination through competition with a HIT-mimicking monoclonal antibody. Accordingly, the LIA has been called a “functionalized immunoassay”, which in theory suggests that it might provide diagnostic specificity that is intermediate between the highly specific functional assay, SRA, and the less specific PF4-dependent EIA methods. This an easily automated procedure with a turnaround time of approximately 20 min. Studies have shown a 97.4% sensitivity and a 91.2% specificity.7

Lateral flow immunoassays detect IgG antibodies against PF4/polyanion complexes contained in an evaluation card in which the results are visually read. With a 10 minute incubation time, this is a quick method to determine the presence of a HIT.

This method detects platelet-activating antibodies. The SRA measures the radiolabeled serotonin released from platelets.9,10 A positive result requires > 20% release of serotonin with low dose UFH and < 20% release in the presence of high UFH levels. This method in the past has been generally recognized as the gold standard for confirmatory testing. It has a 95% sensitivity and specificity rate. The SRA picks up detection of platelet activating antibodies. It has highest sensitivity/specificity for clinical HIT. The SRA also has far greater diagnostic specificity than the EIA. The SRA should not be performed without a previous positive EIA result as a screening test. This will help rule out the issue of a false positive SRA. If a negative EIA is found in a subject specimen with a positive SRA this should be a “red flag warning” that the SRA method needs to be evaluated.

The SRA may also provide information on whether a HIT serum sample may produce a strong platelet response in the absence of heparin. The heparin-independent platelet activation is a warning of an extremely severe presence of HIT. This finding could indicate delayed-onset HIT and strong positive HIT with the presence of consumptive coagulopathy with a risk for microvascular thrombosis.

The test is complex, expensive, and time consuming. Normal donor platelets are required (hard to standardize because of individual normal donor reactions). Therefore, it’s a relatively unstandardized test that is not widely used.9,10

Some investigators have observed the HIPA method is more sensitive for detecting platelet activating antibodies than the SRA procedure. This finding however may be picking up nonpathogenic antibodies which leads to lowering the diagnosis specificity.6

Light-transmittance aggregometry (LTA) aggregometry was the first assay used to determine a qualitative platelet response to HIT antibodies. It is performed by placing normal donor PRP and patient PRP in a cuvette that is being stirred. Heparin is added to the mixture at different concentrations, and the aggregation is monitored for 15 min. If a sample displays aggregation, a higher concentration of heparin is added to determine the point at which aggregation is inhibited. This is given a positive or negative qualitative result determination: negative, weak positive, or strong positive (0, 2, 3). This assay is no longer used to the labor intensity involved and its relatively low sensitivity.11

– Whole Blood (WB) platelet aggregometry uses a mixture of normal donor platelets, and patient whole blood or serum, depending on the aggregometer being used. If that information is not known the donor should be blood type O. The whole blood donor(s) should be prequalified (using a HIT positive sample) to ensure that the sample reacts to the Antibody. Depending on the WB method the specimen may be drawn in a regular 3.2% sodium citrate tube or a special hirudin collection tube. Both methods use a form of impedance aggregometry.. For each method, heparin and blood specimens are incubated and aggregation is observed by impedance aggregometry. Any specimens showing an aggregation response are then challenged with a higher concentration of heparin until no aggregation is determined. WB platelet aggregometry is considered a quantitative assay and is reported as values from 0-3, depending on the concentration of the heparin required to reduce the aggregation observed.11

Flow cytometry for the presence of HIT

The Platelet P-Selectin Expression Assay (PEA) is used for evaluation of HIT by flow cytometry. As we discussed earlier, the SRA method is the “gold standard” for confirmatory testing to recognize antibodies that can recognize PF4 in a compex with the presence of heparin.  Some patients treated with heparin without the presence of HIT may be positive for the antibodies.  The SRA is usually only available in special reference laboratories.  The method is time consuming, technically demanding and expansive.  A rapid turn-around-time is not possible which will further delay the diagnosis for the presence of a HIT which requires immediate treatment to prevent possible life threatening issues.   A recent study evaluated the SRA method to the PEA technique which uses a flow cytometry system.  The assays uses the PF4 dependent P-selectin expression assay the PEA.  A retrosoectuve study was performed on stored serum specimens from 91 subjects.  All of the patients assayed had previous HIT 4Ts information that included the following: thrombocytopenia, the time of the platelet amount loss, a diagnosis of thrombosisand any other casue of thrombocytopenia.  All of the subjects with a intermediate 4Ts score and a elevated PF4 EIA test with an OD ≥2.0 or a elevated 4Ts score and a lower PF4 EIA test with a OK of ≥1.0 were classified HIT positive; other specimens were classified as HIT negative.

In this study the PEA had a higher diagnostic result (area under the curve [AUC] of 0.92 vs 0.82;P-0.02) than the SRA. Eleven of 16 serum samples that were PEA positive and SRA negative were HIT positive. The authors stated that other studies using specimens with similar platelet markers and specimens that were serially diluted srom subjects with confirmed HIT diagnoses demonstrated that the PEA is more sensitive than thSRA for platelet-activating antibodies.

They therefore concluded the PEA is simpler to perform and the results showed a more accurate result when diagnosing the existence of the presence of an HIT.13

Another flow cytometry based assay is the HITAlert from IQ Products. In a 2013 study a protocol was developed using the HITAlert flow cytometry method to detect HITs in a tertiary care hospital laboratory setting.  They compared the 4Ts score to screen the possible presence of a HIT in 37 subjects.  Serum was analysed for the presence of HIT antibodies by the HITAlert flow cytometry method and then compared to a antigenic assay.  The comparative methods were the particle gel immunoassay (PaGIA) ID PF4/Hep Ab assay and two functional tests.  They used the Multiplate WBA (not available in the U.S. and Canada) and the SRA methods.  Their finding were as follows:  Flow Cytometry showed HIT positives in 14 of the 37 patients.  In the 4Ts score of low (0 of 8) intermediate (5 0f 19) and high (9 of 10). When comparing to the SRA the flow method had a specificity of 100% and a sensitivity of 81% for identifying the presence of a HIT.  The WBIA functional test also had an 81% sensitivity and a specifity of 90%when compared to the flow cytometry analysis.  However, the PaGIA procedure only had a specificity of 20% but a sensitivity of 20%.  Flow cytometry had improved specificity to the antigenic procedure.  This was most prominent in the 4T intermediate-risk group.  This was evident in all 3 functional methods used in the protocol. The investigators concluded that the HITAlert flow cytometry method could improve the specificity of identifying a HIT without losing any sensitivity.12 This assay is for research use only in the U.S. and Canada and is not available for diagnostic procedures.

I would like to conclude with an algorithm that is in reference #14 by Cuker et al, that is recommended for the diagnosis of HIT. It is a diagnostic algorithm of intermediate/high 4Ts score, followed by immunoassay, followed by functional testing that results in: • Few false negatives (missed HIT diagnoses), and • Few or no false positives (incorrect diagnoses of HIT).

Note: A functional assay may not be necessary for patients in the high probability group based on their 4Ts score and a very strongly positive immunoassay (ELISA value of > 2.0 OD units).

The incidence of HIT presence is an adverse drug interaction moderated by platelet-activating antibodies that target the complexes of PF4/heparin. It is the responsibility of the laboratory to determine the proper laboratory assays to identify the presence or and the functional ability of the thee heparin-induced antibodies to activate platelets. These assays need to be performed in a timely manner to assist physicians in preventing catastrophic thrombotic situations. 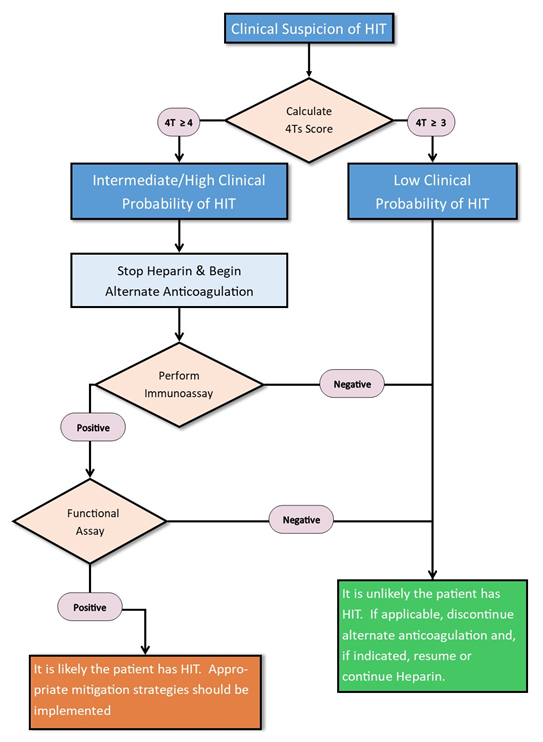