Thrombodynamics® is for research use only in the US and Canada. 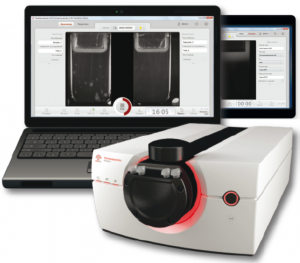 It is traditional to think about blood coagulation as a cascade (Fig. 1), though it is more accurately described as a network of proteolytic reactions. According to the cascade concept, coagulation is initiated by contact of plasma with a transmembrane protein tissue factor (TF) that is normally present only in  extravascular cells.  Therefore such a contact only occurs as a result of vascular damage or other injury, e.g., inflammation. A low active serine protease factor VIIa binds TF to become a fully functional enzyme that activates factors IX and X via limited proteolysis, factor IXa then additionally activates factor X, and factor Xa activates prothrombin into thrombin. Thrombin produces fibrin that spontaneously polymerizes resulting in gelation of plasma at the site of injury.

In addition, thrombin strongly amplifies its own production through activation of cofactor proteins factors V and VIII. Factors Va and VIIIa greatly accelerate action of factors Xa and IXa, respectively, when assembled in factor Va:factor Xa (prothrombinase) and factor VIIIa:factor IXa (intrinsic tenase) complexes on negatively charged lipid surfaces, such as those found on activated platelet membranes. Thrombin also activates platelets (not shown in Fig. 1) and factor XI; the latter then provides an additional pathway of factor IX activation. Factor XI can also be activated by factor XIIa in a so-called ‘contact pathway’ of coagulation triggered by the contact of a foreign surface with blood or plasma.

Relating the in vitro biochemistry of the coagulation cascade with real-life processes (Fig. 2) developing in space and time, is less straightforward as the model above suggest. There is no single site in the vasculature where all of the sequential cascade reactions co-exist. Some of the reactions, e.g., TF-dependent initiation, predominantly occur on the damaged sub- endothelium; after this event, activated coagulation factors diffuse into plasma to form complexes of tenase and prothrombinase on the activated platelet membrane. Intriguingly there is even a microscale segregation whereby procoagulant reactions occur on the membrane surface, whilst plasma is strongly anti-coagulant. Also the protein C pathway reactions actually occur only on the undamaged endothelium due to their dramatic acceleration by thrombomodulin and binding of protein C by endothelial protein C receptor. 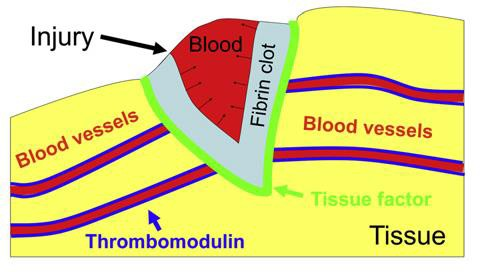 Therefore there are several distinct processes that occur at different places with little overlap, both at the microscopic and macroscopic levels. They are only connected together by such transport processes as diffusion and flow. Activation, spatial propagation, and termination of coagulation are regulated by different subsets of chemical reactions that have different spatial localization, so that only diffusion and flow can link these distinct “compartments” together into the one functional system. The first step is initiation. Any type of vessel wall damage (either physical disruption or inflammation) results in the contact of blood with TF of either subendothelial origin or expressed by inflamed cells of the vasculature. This leads to the factor VIIa-TF complex formation and factor X activation thus initiating the blood clotting cascade.

The next critically important step is spatial propagation. Obviously, without diffusion, there would be no fibrin clot, because TF is located on the cell surface. To make the biologically necessary three-dimensional plug, it is important for coagulation to propagate in space, to transfer the activating signal from the damaged surface into plasma. The data of several groups suggest that the second module of the coagulation network (platelet-dependent reactions, factors IX, VIII, XI) is critically important to ensure spatial propagation: factor IXa diffusion spreads the activating signal, factor VIII activation amplifies the signal, and factor XI activation by thrombin can amplify it even further, possibly turning the TF-activated coagulation response into a self- sustaining wave under certain conditions.

Finally, there is termination of the spatial propagation. There are data showing that thrombomodulin plays a role in preventing un-checked clot propagation.

The mechanism of blood coagulation described above provides the basis for the Thrombodynamics assay, a revolutionary method for coagulation assessment. In contrast to routine assays, the activation of clotting in Thrombodynamics takes place not in the whole volume of plasma but on a surface carrying thromboplastin (a coagulation activator containing TF and phospholipids) imitating vessel wall damage. The process of spatial clot growth is monitored in a thin layer of unstirred blood plasma. This experimental model allows greater evaluation of the coagulation state by better imitating in vivo blood coagulation.

Thrombodynamics is both a qualitative and quantitative evaluation of the blood plasma sample coagulation status by means of measuring and analyzing the spatiotemporal dynamics of fibrin clot growth in a heterogeneous in vitro system. The Thrombodynamics method aims to imitate in vitro physiological and pathophysiological processes that occur in vivo during hemostatic plug formation or thrombosis. The coagulation process in Thrombodynamics starts from a localized surface which has immobilized tissue factor mimicking blood vessel wall damage. Unlike any other coagulation assay the fibrin clot growth process in Thrombodynamics assay develops in space and time rather than only in time. The Fibrin clot starts to form, growing from the tissue factor bearing surface, then propagating into the bulk of the plasma sample without interaction with the surface.

As soon as the blood plasma sample comes into a contact with TF the coagulation process initiates and fibrin clot starts growing from the end face of the activating insert into the bulk of the plasma sample. The process of fibrin clot formation is recorded by the Thrombodynamics Analyzer in a time-lapse video microscopy mode by means of dark-field light scattering method. The digital camera of the T2 Analyzer takes a series of photos of the light scattering from the cuvette. 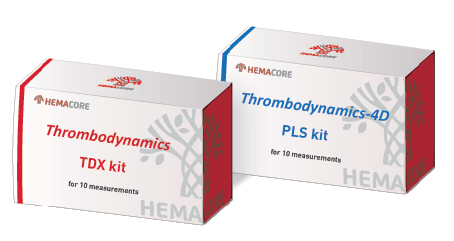