Structure and Function of Collagen IV

The basement membrane, or basal lamina, is a specialized extracellular matrix (ECM) that underlies epithelial and endothelial cells and surrounds adipocytes, peripheral nerves, and muscle.  There are five main components that make up all basement membranes: type IV collagen (collagen IV), laminin, nidogens, perlecan, and fibronectin.  The functions of the basement membrane are to provide structural integrity and polarity to overlying cells, while also physically influencing cell behavior.  It does this by serving as an adhesive substrate for cells to bind, functioning as filtration barriers, and regulating cell growth and differentiation.

Collagen IV is comprised of six distinct collagen IV chains, COL4A1-COL4A6 (also written as a1(IV)-a6(IV)).  The chains assemble into heterotrimeric isoforms that form strong scaffolds together with laminins, nidogen, and perlecan.  COL4A1 and COL4A2 are the most prevalent collagen IV chains and are ubiquitously expressed in nearly all epithelial basement membranes, but are also the only Col IV chains found in the liver.  The remaining COL4A3-COL4A6 chains are distributed in a tissue-specific manner with  COL4A3, COL4A4, and COL4A5 being found in the kidney, lung, and neuromuscular junctions and  COL4A5 and COL4A6 are expressed in smooth muscles and at neuromuscular junctions.

It is important to note that all collagen IV a-chains contain an N-terminal 7S domain, a triple helix collagenous domain, and a C-terminal non-collagenous domain (NCl domain).   Serum and urinary levels of the 7S domain and NCI domain are thought to indicate basement membrane degradation, whereas measurements containing the helical region are considered to represent basement membrane formation. 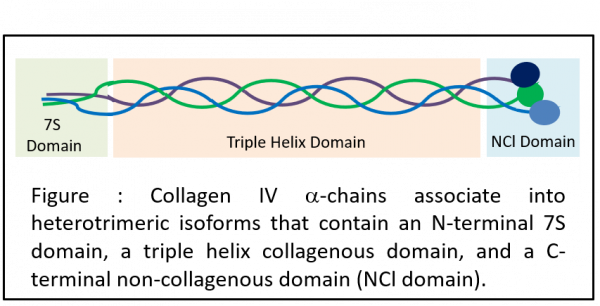 Due to the multifunctional and widespread importance of collagen IV for tissue integrity, collagen IV can also be used as an indicator of fibrosis. Chronic liver disease comprises a number of progressive disorders which culminate in liver cirrhosis and are characterized by excessive collagen deposition. Although various types of collagen (type I, III, IV, V and VI) are increased in the liver during the progression of fibrosis, type IV collagen is particularly noteworthy for the following reasons:

Therefore, collagen IV can be used as a biomarker for monitoring fibrosis associated with the liver diseases NAFLD, NASH, and drug induced liver injury (DILI), during research studies.  It is suggested that serum collagen IV levels are indicative of hepatic basement membrane metabolism or turnover.

The capillary vessels of the kidney glomeruli are particularly sensitive to changes in collagen IV levels and haemodynamic states. Glomerulonephritis occurs when the filtering component of the kidney, the glomerulus, becomes injured.  Injury to the glomerulus can drive fibrosis and the accumulation of collagen IV. Diabetic nephropathy is characterized by high blood glucose levels that lead to nephron damage.  Elevated urinary collagen IV levels in diabetic individuals correlate to glomerular fibrosis.  Chronic kidney diseases, including chronic transplant nephropathy, may exhibit altered collagen IV levels, indicating that collagen IV turnover in the basement membrane is affected following kidney damage.  Injury to the liver and kidney elicits a pro-fibrotic response that releases collagen IV, making collagen IV an interesting biomarker to consider while investigating liver and kidney fibrosis and damage.

Collagens, including collagen IV, are localized to the endothelial basement membrane of the vascular wall to maintain vessel integrity and stability. Collagen IV has vascular filtration functions and contributes to vascular resistance. Pathologic fibrosis may coincide with imbalanced collagen turnover in vasculature.  Additionally, accumulated collagens may lead to thrombosis and decreased collagen levels can lead to vessel rupture and bleeding.

There is an interesting relationship between haemodynamics and collagen IV metabolism in the basement membrane.  Collagen IV serum levels are elevated in individuals with hypertension, likely in response to structural damage that occurs with elevated vascular pressure.  Collagen IV peptide levels also correlate with haemodynamics during acute heart failure.

Basement membranes function as important barriers to prevent tumor invasion and metastasis of cancer.  In healthy tissue, the extracellular matrix and basement membranes undergo remodeling to replace old proteins through tightly regulated enzymatic pathways. However, during cancer, these dynamics are altered such that the basement membrane can be abnormally remodeled or degraded.  The turnover and degradation of basement collagens is associated with the invasiveness of tumor cells.

Collagen IV is a biomarker with potential uses as an indicator of tumor angiogenesis, tumor progression, and response to treatment.  Studies support collagen IV as a biomarker for cancers that include colorectal cancer, lung cancer, gastric cancer, breast cancer, pancreatic cancer and more.  In regards to serum, elevated collagen IV levels can positively correlate with the tumor burden.  In vitro studies have shown that pancreas tumor stroma cells are able to express and secrete collagen IV, which could in part explain the increased levels collagen IV in pancreatic cancer patients.  On the other hand, collagen IV levels can indicate shrinkage of tumors as well.  Studies with glioblastomas show that circulating levels of collagen IV can be used as an indicator of the thinning of the vascular basement membrane following antiangiogenic therapy, thus a response to treatment.

Chronic obstructive pulmonary disease (COPD) is characterized by inflammation of the lung that leads to obstructed airflow and small airway fibrosis.  One structural characteristic of COPD is altered basement membrane content and basement membrane remodeling.  The disruption of basement membrane homeostasis results in pulmonary fibrosis and collagen IV turnover.  In research studies, serological biomarkers of collagen IV degradation have been shown to associate highly with mortality in subjects with COPD.  Thus, serological levels of collagen IV can indicate valuable information regarding lung fibrosis and pulmonary disease states that are needed during pulmonary drug development.