The TECO® Ultra Sensitive Salmonid Vitellogenin ELISA kit is a 96-well immuno-capture ELISA product. Mucus and cell culture samples are incubated with the vitellogenin specific antibody-coated microtiter plate. After unbound material is washed out, a polyclonal biotinylated antibody binds to the vitellogenin. In the following incubation step, a streptavidin-peroxidase conjugate binds to the biotinylated antibody. In the final substrate reaction, color development is directly proportional to the amount of vitellogenin in the sample.

The standard range of the assay is between 0 and 1.0 ng/ml. A calibration curve can be established by plotting standard concentration on the x-axis (linear scale) against the absorbance of the standards on the y-axis (linear scale). The vitellogenin concentrations in samples can then be read off the calibration curve. A 4-parameter curve fit should be used for automatic data reduction. If samples were pre-diluted, the concentration can be obtained by multiplying the value read off the calibration curve by the dilution factor. A dilution correction for mucus is not necessary if only the 0.5 ml Extraction Buffer was added to the swab. Samples with higher absorbance values than Standard A should be tested again,  pre-diluted with Dilution Buffer,  and then this additional dilution should be taken in account for the concentration calculation. 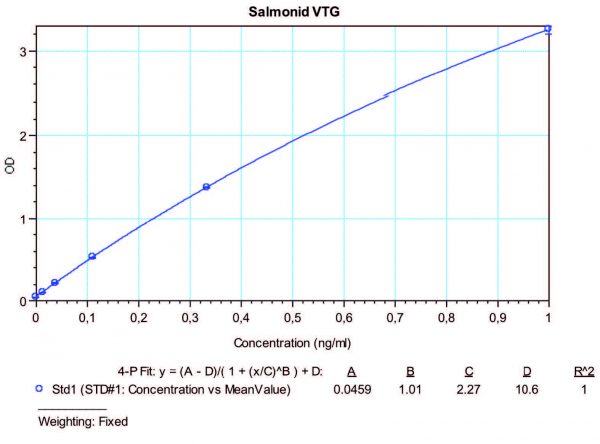