FluoBolt™ α-KLOTHO protein immunoassay is a 96-well format, complete ELISA kit with a standard and control samples in a pooled serum matrix.    This assay is intended for measurement of α-KLOTHO protein in just 10 uL of undiluted serum or plasma samples.

Although there are assays for measuring Klotho protein levels available in the market, they are reported to have inconsistent quality records, or are semi-quantitative in nature (eg. immunoprecipitation-immunblot).  FluoBolt™-Technology provides a high sensitivity Klotho protein assay for basic and clinical research, which increases detection and may improve data consistency in literature.  The kit offers individual lyophilized standard/calibrator vials, so no dilution series or calculations are needed.  The calibrator is a recombinant protein with a c-terminal His-tag and an MW of approx. 120kD representing the whole extracellular domain (isoform 1) containing KL1 and KL2. Additionally, the kit also includes 2 lyophilized controls in a serum matrix.  Measurement of human klotho protein is ideal for use as a kidney disease biomarker in basic and clinical research. 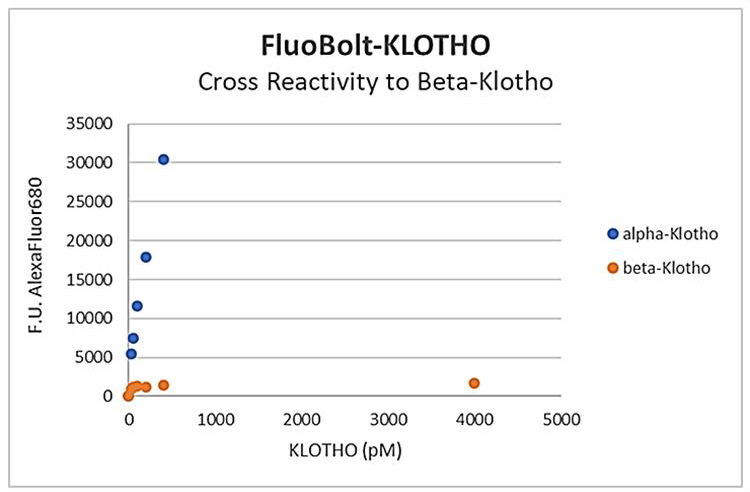 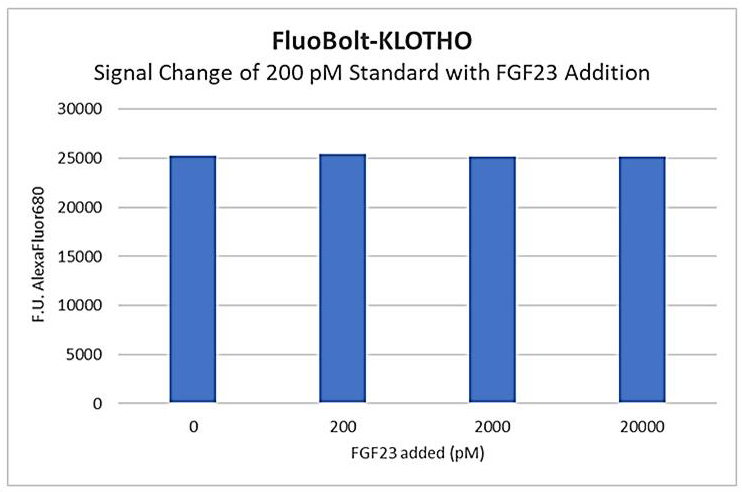 Cross-Reactivity:
Human α-KLOTHO protein shares between 84-100% aa sequence identity with primates, mice, rats, hamster, and pig protein (shown in the chart below). Cross-reactivity of this assay with species other than human has not been tested with FluoBolt™ α-KLOTHO.

The name for the klotho (KL) family of proteins was derived from Greek mythology.  Clotho was the daughter of Zeus and Themis and one of the three fates.  Clotho was the fate that spun the thread of Life, while the other Fates would each draw out or cut this thread.  There are three subfamilies of Klotho: α-Klotho, β-Klotho, and γ-Klotho.  Α-Klotho and β-Klotho are essential components of the endocrine fibroblast growth factor (FGF) receptor complexes.  They are required for the high-affinity binding of FGF-19, FGF-21, and FGF-23 to their cognate FGF receptors (FGFRs).  When the subfamily is not specified, the word “Klotho” generally means the α-klotho protein subfamily. 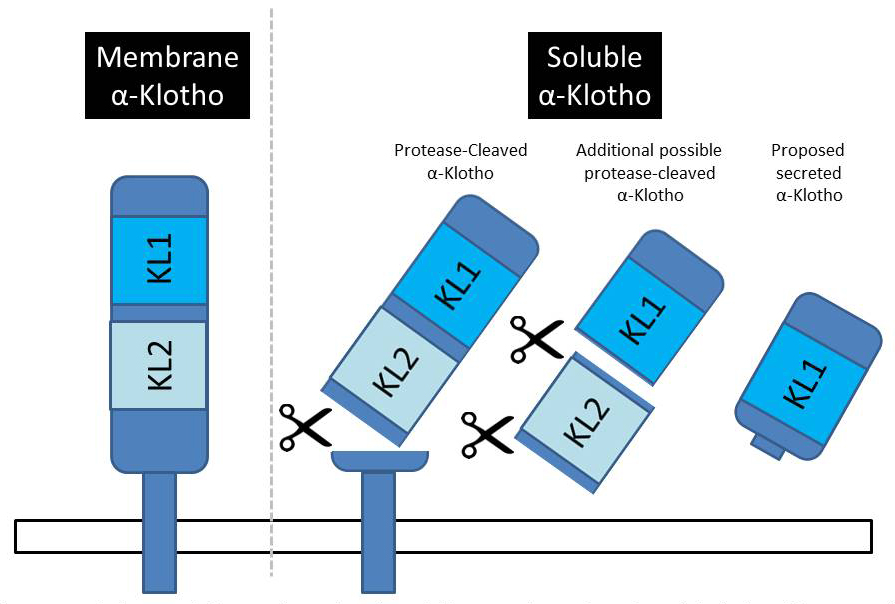 Figure 1     Klotho protein can exist in a membrane-bound or soluble state. The membrane bound Klotho is mainly expressed on cells of the kidney and acts locally on kidney biology via signaling interactions with FGF-23. Soluble Klotho protein can be produced by protease cleavage sites within the membrane bound isoform, or a proposed directly secreted isoform. As a soluble form, Klotho can enter the blood stream and act distally, similar to a hormone or cytokine.

Membrane-bound Klotho protein is a single transmembrane protein with a short (10 amino acid) intracellular domain that is not yet credited for any signal transduction (shown in Figure 1). The extracellular part of Klotho protein contains two homologous domains, termed KL1 and KL2.  Between the membrane and KL2 and in between KL1 and KL2 are cleavage sites for ADAM10 and ADAM17.  Cleavage produces soluble Klotho proteins that either contains independent KL1 domain, KL2 domain, or both.  The form containing both KL1 and KL2 is 130 kDa in size and appears that the predominant form of soluble Klotho protein.  In fact, neither secondary cleavage product has been detected in human serum so far, only in in vitro systems. In addition to cleaved membrane Klotho protein, an alternatively spliced Klotho mRNA transcript is hypothesized to code for a secreted Klotho protein, comprised of the KL1 domain with a 10 amino acid tail.  The soluble forms of human klotho protein are detected in blood, urine and cerebrospinal fluid.

Human klotho protein is often described as the fountain of youth protein and seems to translate across species in studies of function and biomarker usefulness.  When Klotho was first discovered, Klotho deficiencies in a mouse model produced a phenotype that was similar to human aging.  These mice died prematurely, but also showed decreased muscle strength, endurance, cognitive ability, and osteoporosis.  Although the vast majority of research has been based on lack of Klotho in mouse models, overexpression of Klotho extends lifespan by 20–30% compared to wild type mice and is protective for kidney disease, cardiac and vascular disease, lung damage, neurodegenerative disease, and diabetes.  Exogenous Klotho protein in Klotho-deficient mice or even aged animals improves the aging phenotype.  In humans, variations in the Klotho gene are associated with both life extension and increased cognition in human populations.  In addition, soluble Klotho protein has been shown to be a circulating factor detectable in serum that declines with age.

The functions of Klotho are mainly linked to FGF-23 induced signaling and related to their role in mineral homeostasis.  The Klotho gene is under the transcriptional control of PPARy and is most predominantly expressed in the epithelial cells of the renal tubules in the kidney, but is also detected in the brain and to a lesser extent a variety of other tissues. Most publications referencing klotho to date utilize it as a kidney disease biomarker.

Klotho exists in at least two forms including a membrane form and a soluble form. The two forms of Klotho have distinct functions in the regulation of various physiological and pathophysiological processes.  Membrane Klotho forms a complex with the fibroblast growth factor 23 (FGF-23) and FGF receptors to regulate renal phosphate excretion and calcium reabsorption. As mentioned above, the soluble form can be produced as a result of a protease cleavage of the extracellular portion of the membrane bound Klotho or a proposed alternative spliced explicitly secreted form of Klotho.  In either case, soluble Klotho can be released into circulation and act as a hormone on distal tissues and organs.

In a rat model of Acute Kidney Injury (AKI) a rapid decrease in plasma and urine Klotho protein is detectable as early as at 3 h after injury. Changes in Klotho protein levels were detected earlier than serum creatinine (24 h) and NGAL (5 h). This report also suggests that Klotho protein levels in the urine of AKI subjects are lower than healthy subjects, but more work focused on timing and specificity need to be established.

Commercial products for detecting soluble Klotho protein in biological samples has been riddled with obstacles that have hampered Klotho studies.  While commercially available antibodies against human Klotho are available, several reports claim them to be non-specific and cross-react with other proteins. Many of the commercially available antibodies are not well characterized and it is unclear whether commercial assays are detecting the 130 kDa and/or 65 kDa circulating isoforms.  It is reported that novel anti-Klotho antibodies exist, but are currently not commercially available. Some use an immunoprecipitation-immunblot (IP-IB) assay in fresh urine samples, but the technique is labor intensive and difficult to scale up.

In addition to the antibody issues, generation of recombinant Klotho is difficult and the unpredictable quality of commercially produced recombinant proteins may affect the reproducibility of ELISA products.  For example, when one study compared a time-resolved fluorescence immunoassay (TRF) to an ELISA, no correlation was found between the assays and the levels of serum Klotho protein differed with by a factor 1000.  Furthermore, a related technical challenge is that soluble Klotho protein appears to be unstable in biological samples.  Standardization of techniques to prevent degradation and optimization of stable sample storage (fresh vs frozen) would eliminate conflicting data for use as a kidney disease biomarker, but no consensus protocol has yet been determined.

While improvements in sample preparation still need to be addressed, Fianostics is adding to the toolbox for Klotho researchers with FluoBolt™ alpha-Klotho.  The hope is to increase the options available to researchers so that they can produce accurate results and reliable conclusions concerning Klotho as a kidney disease biomarker.