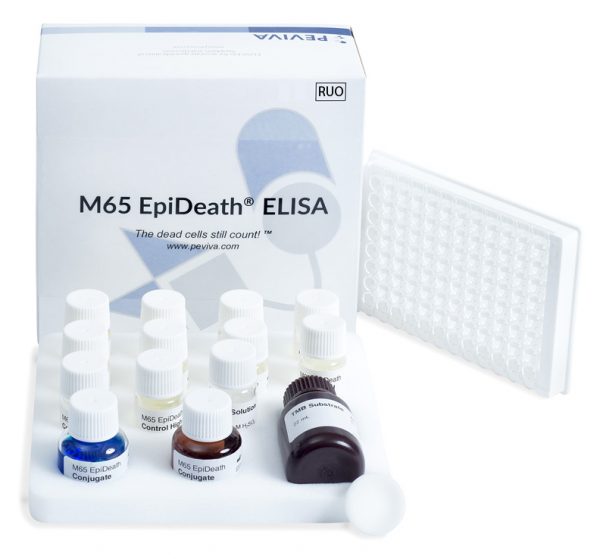 The M65 EpiDeath® ELISA kit measures the concentration of soluble CK18 (K18) in cell culture supernatants, serum or plasma for research studies. CK18 levels reflect the amount of total epithelial cell death, regardless of the cause of death.

The M65 EpiDeath® ELISA is based on the same monoclonal antibodies as the M65® ELISA, except mAb M5 is used as the capture antibody (mAb M6 is used as capture antibody in the M65® ELISA). Reaction buffers have also been slightly modified This CK18 kit is manufactured differently and thus measures the (complex bound) CK18 epitopes differently than the M65® ELISA, which leads to a better discrimination between low or normal and high levels. It has a broad range as well.

The M65 EpiDeath ELISA is recommended whenever a customer wants to identify cell death with high sensitivity and specificity in research. The M65 ELISA is the better choice for customers intending to determine the cell death mode when using in combination with the M30 Apoptosense ELISA, especially when using a mathematical approach to describe the distribution between apoptosis and necrosis. The M65 EpiDeath® ELISA is a solid-phase sandwich enzyme immunoassay. Standards, controls and samples react with a solid phase capture antibody M5 directed against K18 and the HRP- (Horseradish Peroxidase) conjugated M6 antibody directed against a different epitope of K18. Unbound conjugate is removed by a washing step. TMB Substrate is added. The color development is stopped and the absorbance is read. The resulting color is directly proportional to the concentration of the analyte. By plotting a standard curve from known concentrations versus measured absorbance, the amount of antigen in the sample can be calculated. The concentration of the antigen is expressed as units per liter (U/L). Cells die by apoptosis or necrosis. The mode of cell death depends both on the type of stimulus (e. g. the cytotoxic agent and tumour upon chemotherapy, or the mechanism of injury upon liver diseases) and the type of tissue (e. g. the tumour). The combination of the M30 Apoptosense ELISA and the M65 EpiDeath ELISA quantifies not only the amount of cell death, but also the cell death mode (apoptosis or necrosis) in blood samples (serum or plasma) or cell supernatants.

Cytotoxic agents used in oncology try to overcome the disruption of the apoptotic process and stimulate apoptosis. Dependent on the type of tumour and the cytotoxic agent, necrosis can be triggered instead. An apoptotic stimulus may under conditions of deficient cellular ATP generation fail to induce the apoptotic program and cells instead undergo necrosis.

When researching the liver, injury may lead to cell death of hepatocytes – either by necrosis or apoptosis.

Keratin 18 (K18) is an intracellular protein expressed at high levels by many types of epithelial cells. Most K18 molecules will form insoluble filaments in the cell, but a pool of soluble K18 can also be demonstrated. During cell death, the cellular content of K18 will be released into the extracellular compartment. Research measurements of extracellular soluble K18 will therefore reflect epithelial cell death “by any cause” (due to apoptosis and necrosis).

The M65 EpiDeath® ELISA uses two anti-K18 mouse monoclonal antibodies of the IgG type and is intended for assessment of epithelial cell death using human serum or plasma research samples. The M30 Apoptosense® ELISA specifically measures a neo-epitope formed by caspase-cleavage of K18 at Asp396 (K18Asp396-NE or M30 neo-epitope) and will reflect apoptosis of epithelial cells. The units of the two assays have been calibrated against the identical standard material to allow the calculation of a ratio between caspase-cleaved and total K18 (“M30:M65 ratio”). Induction of apoptosis in cultured cells will result in release of caspase-cleaved K18 and in relatively high M30:M65 ratios, whereas induction of necrosis will almost exclusively result in release of K18 molecules that are not caspase-cleaved and in a low M30:M65 ratio.