On May 9-11, 2019 the Hemostasis Thrombosis Research Society (HTRS) and North American Foundation of Thrombosis and Hemostasis (NAFTH) met in New Orleans, LA for a large Clotting and Bleeding Clam Bake of clinical and research information sharing.

The first large exchange of information was that the two societies of HTRS/NAFTH would now merge under the banner of the HTRS for future meetings and business. This will result in more beneficial exchange of supporting collaborative research.

The first education session was a lively discussion on DOAC Reversal in a Bleeding Patient: Yes or No.

A case was presented of a subject suffering from a hemorrhage while undergoing a colostomy.

The audience was asked to vote via meeting APP as to whether they would use the anti-Xa reversal agent for a subject experiencing a severe hemorrhage while on an anti-Xa medication. The reversal agent in question to be used was Andexanet-alfa. The primary questions are: do the lab results correlate with the bleeding? Is the reversal agent really necessary?

Her talking points were the following:

I noticed that her last bullet said in some patients. When talking about reversal of DOACs the medical community is still conflicted about when to reverse the medications. We don’t yet have a reference range that tells us when we should reverse a DOAC or if the laboratory values in a subject that is bleeding will really do anything other than let the healthcare team know that the drug is present and is it safe or not to reverse the suspected DOAC problem.

She noted that anticoagulants don’t cause bleeding but they make bleeding worse. She cited Dr. Mark Crowther, MD, with this quote. She then quoted Dr. Clive Kearon, MD on his “First Rule of Thrombosis,” “Don’t anticoagulate a bleeding patient.”

Dr. Siegal then made the points stated below:

When to Consider Using an Antidote in a Bleeding Patient:

Dr. Siegal then brought up the following issues for reasons on why reverse the DOAC present that is causing the bleeding:

It was stated that GI bleeding is not a benign condition. She highlighted a couple of studies on using reversal agents for bleeding in dabigatran

The second study was the ANNEXA 4 study using Andexanet alfa.

Limitations of Data = Uncertainty in Lack of comparator group

Therefore, does the Harm outweigh the benefits to use the reversal agents.

The speaker then quoted what the experts say including surprisingly her “foe” Dr. Cuker et al in an article Reversal of direct oral anticoagulants: Guidance from Anticoagulantion Forum in Am J Hematol 2019;94:697-709.

In summary the experts said:

“We suggest administration of a reversal agent only if bleeding is life-threatening, into a critical organ or is not controlled with maximal supportive measures and there is reasonable expectation that the patient has clinically relevant plasma DOAC levels”.

Dr. Siegal then gave her case for DOAC Reversal: The Case for “Yes”

Dr. Cuker opened his reversal arguments by stating 3 positions to determine the reversal of the DOAC problems. They are 1. Efficacy, 2. Safety, and 3. Cost: 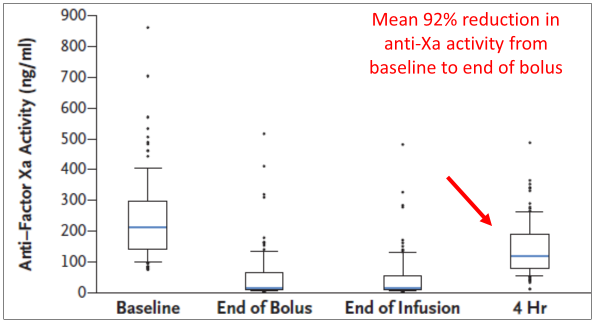 Relationship between anti-Xa and hemostasis

There are not well established ranges for situations in which the levels of DOACs should be reversed. I asked both Dr. Siegal and Dr. Cuker this question. They both replied that they may not know what to do with the actual concentration information. They would know the medication is present and depending on the condition of the patient’s bleeding state they then would make a decision on reversal.

Andexanet alfa’s efficacy is not well-established 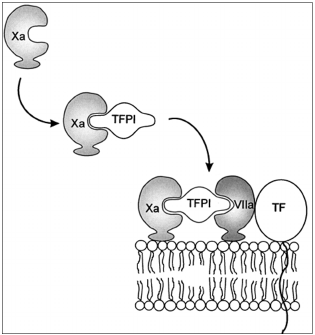 Larry Brace, PhD., Medical Director of Special Coagulation Consultants Laboratory in Des Plaines, IL asked the following question: “Why should we reverse all of the Andexanet at once? Why not a slower withdrawal much like is done in coumadin reversal or withdrawal?” That question caused much discussion but no answers. 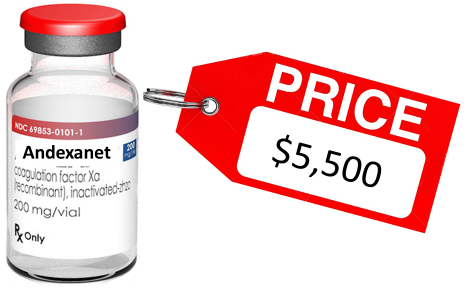 In summary, I would not use andexanet upfront in this patient because…

Andexanet is only approved in the United States and parts of Europe. It is not available in Canada.

The question of the day came from a caregiver who gave a case of a pediatric patient who swallowed a half bottle of their Mother’s Xarelto and came into the EC. The patient was not bleeding yet but the EC doctor said “give the subject a double dose of protamine sulfate.” The patient did not bleed at all. No one could figure out why the physician would give a medication that is not indicated for the DOACs but for heparinoid reversal.

I talked to the person directly and he said he was still perplexed as to why after swallowing a huge amount of Xarelto the patient was not bleeding profusely. I asked him if the physician who prescribed the protamine sulfate ever had a good reason for his order. He said, “apparently he didn’t know what else to do.”

Here we are today still trying to figure out what to do with no FDA cleared testing for measuring the amounts of DOACs. What to do with the information when we can measure it, and how to treat it other than on a case by case basis.

The general consensus was support of the subject with components, use a test like the thrombin time or a anti-Xa specific for the suspected DOAC present and have a reversal agent ready in case of severe, life threatening bleeding.

I would like to thank both Dr. Siegal, MD and Dr. Cuker for allowing me to use their slides and information for this subject.