UPDATE ON THE DIRECT ORAL ANTICOAGULANTS (DOACs): WHERE ARE WE IN THE LABORATORY ALMOST TEN YEARS LATER?

THE FOLLOWING MEDICATION(s) MAY AFFECT THE COAGULATION OF YOUR BLOOD

Unfortunately the coagulation laboratory is still playing catch-up to measuring the effects many of these medications are having on the tests we use to monitor patients hemostatic state!!

Purpose of Anticoagulation: First do no harm?

If a patient is at risk for a clot – prevent it

-When to Use the DOAC’s?
FDA Approvals: Clinical Development Programs 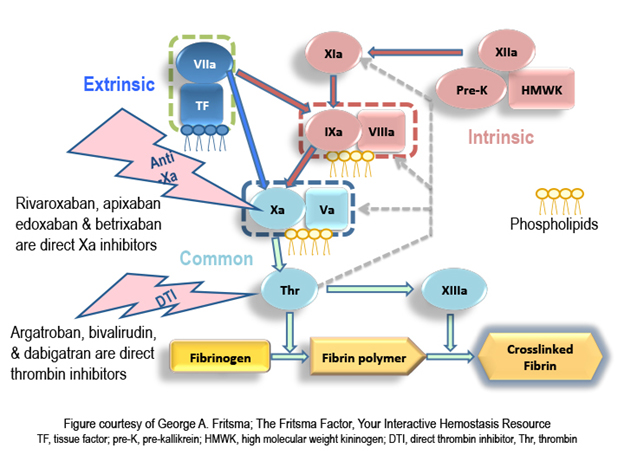 The “Monitoring or not” Concept 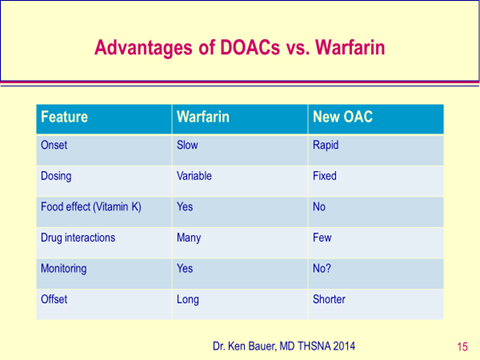 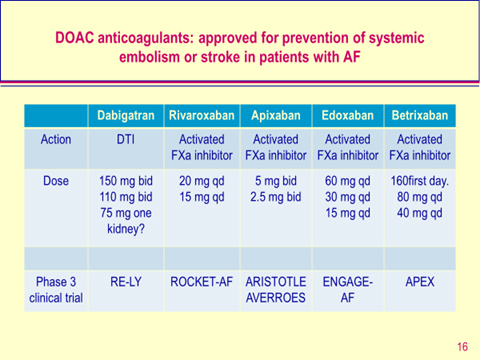 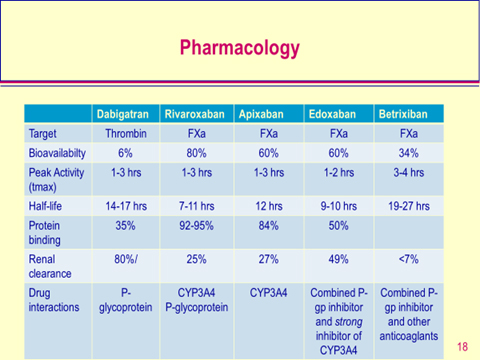 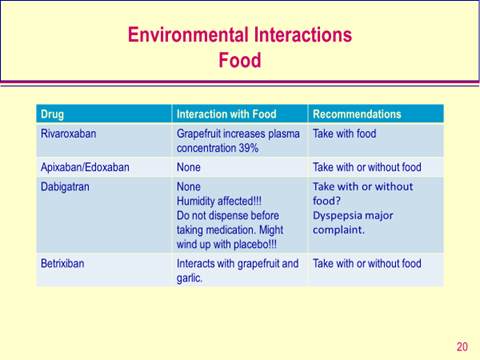 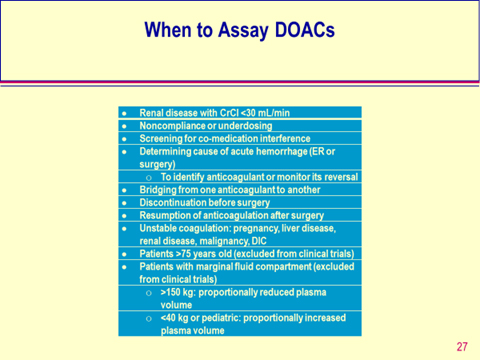 Generic and brand names of DOACs and Reversal agents in 2019

ALL OF THE ABOVE ITEMS ARE NOW FDA APPROVED. 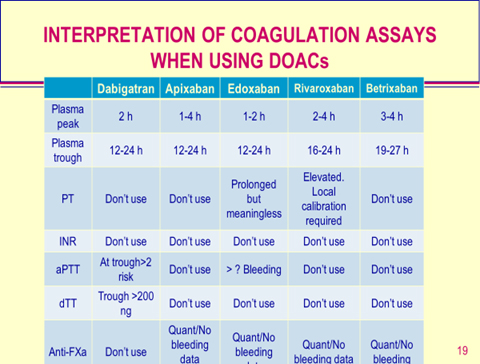 Ecarin clotting time, Hemocot Thrombin Inhibitor and Dilute Russell Viper Venom Screen or Confirm (ECT/HTI/DRVVC) may be used for Anti-IIa DOACs in quantitative assays. The Anti-Xa DOACs have no effect on ECT, HTI but the DRVVC method may be affected by all of the DOACs. The DRVV-DOAC phospholipid may be used to assay all the DOACs. Sennesael AL et al Thrombosis Research 2019. 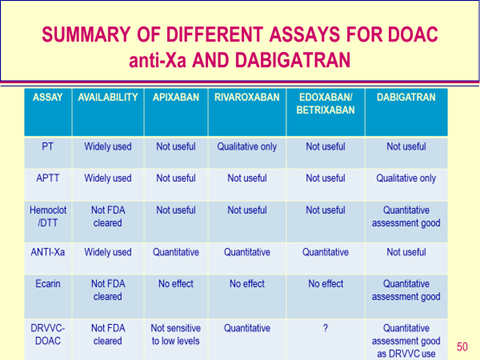 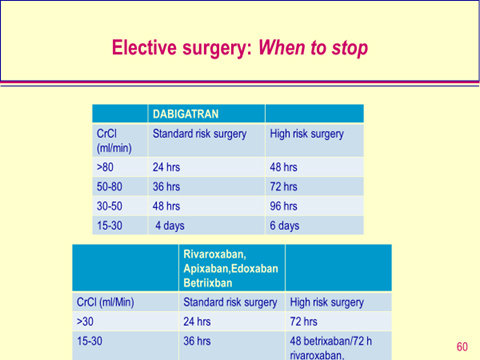 “ A lot of people think that when you don’t need to monitor a drug, you don’t’ need to test for the drug.” Dr. Michael Laposata MD, Ph.D quoted in CAP Today, January 2012.
“Short half life of new drugs means missing a dose could lead to clotting issues quicker than missing a warfarin dose.” Compliance is a huge issue!
Dr. Mark Wuster M.D. THSNA 2012!

Is there a rapid test (POCT) available for detection of DOACs?
DOAC Dipstick (DOASENSE GMbH)

Recently in a manuscript by Job Harenberg, Semin Thromb Haemost 2018. The authors describe a rapid test on urine for detecting Anti-IIa and Anti-Xa DOACs using a dipstick test that only takes 10 minutes. This assay would give emergency rooms and the lab a quick turn-around-test in emergency situations to determine the presence of DOACs.

All of the DOACs are excreted in variable amounts in the urine but without the presence of coagulation factors and inhibitors (specific and non-specific) that may interfere with the plasma coagulation testing.

The test is simple. The DOAC Dipstick is dipped in the urine sample for 2-3 seconds and then allowed to dry for 10 minutes and observe for a color change.

The color changes can be visually observed to determine the positive or negative results. These color changes are available in the testing package insert. An abnormal color of the urine specimen could interfere with the color determination to detect the presence of DOACs. 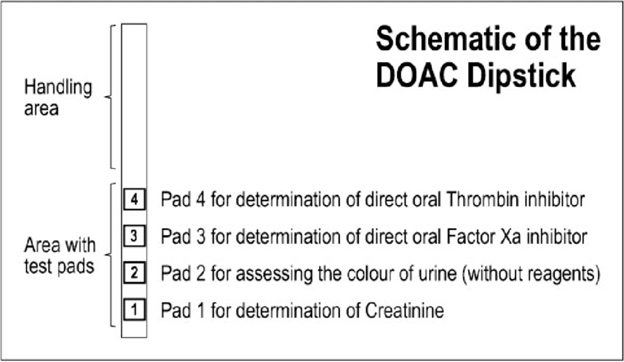 *Because of the low renal clearance of Betrixiban this assay may not be able to pick up the presence of this DOAC. Information is needed to verify this observation.

Can DOACs be removed from plasma samples to prevent interference with plasma coagulation and chromogenic testing?

In the last few years a product has been developed that can remove DOACs from plasma to remove the effect that these medications have on almost all of the coagulation clottable methods.

The testing was performed by adding one tablet of DOAC-Stop (Haematex has proprietary information on composition of reagent tablets) to 1.0 ml of citrated plasma. The specimen is gently mixed for 5 minutes and centrifuged for 2 minutes at 2,000 g to precipitate DOACs with the adsorbent tablets.

This product gives the laboratory a way to test subjects on DOACs without the interferences they can cause on the above methods.

In a recent article in Blood 2018 by JM Connors the author discusses the issues of DOAC measuring in the almost 10 years these drugs have been in use. It is obvious in certain clinical situations the physicians and the laboratory should work to have tests available to render patient care when the DOACs are present. I will never forget my first calls for an anesthesiologist who called our laboratory and said “What the Hell is Pradaxa. His family told us he was off coumadin but said nothing about any other blood thinner.” Or a laboratory who called wanting to know what tests to use in monitoring Pradaxa. They had a patient with atrial fibrillation come in through the EC on the weekend. They couldn’t convert her and put the patient on Pradaxa and sent her home with follow-up scheduled. Her daughter went to check on her and the subject had fallen and hit her head and bled out and expired. This was back in 2011.

We have come a long way with testing for DOAC specific methods. However, to date we have limited test availability in Europe and almost none in the United States. No assays are licensed.

The assaying of DOACs should be available in certain critical clinical situations such as life- threatening hemorrhaging, emergency surgery, changes in patient health issues. This is especially important with the emergence of the reversal agents for DOACs.

As usual more study is needed but the agencies such as the FDA need to give the physicians and the laboratorians the tools to solve these issues.