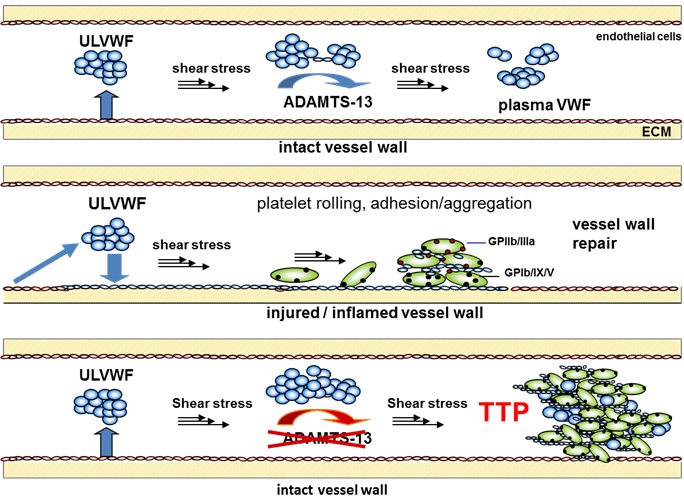 ADAMTS-13 (a disintegrin-like and metalloproteinase with thrombospondin type 1 motif 13) is an enzyme (vWF-cleaving protease or vWF-CP) that specifically cleaves von Willebrand Factor (vWF) multimers.  If the activity of ADAMTS-13 is decreased, unusually large vWF multimers may accumulate within blood causing thrombosis due to platelet aggregation, which in turn may lead to TTP (thrombotic thrombocytopenic purpura). Differentiation of TTP from other thrombotic microangiopathies (TMA) is challenging. TMA is characterized by microvascular thrombosis and include diseases classified as hemolytic uremic syndrome (HUS) and TTP. Certain forms of HUS (i.e. atypical HUS) are not associated with severe deficiency in ADAMTS-13 activity. Mild or moderately reduced ADAMTS-13 levels has also been associated with other conditions. Therefore, in research subjects exhibiting laboratory evidence of thrombocytopenia and microangiopathic hemolysis, the measurement of ADAMTS-13 activity can be invaluable in differentiating TTP from other similar conditions.

Congenital TTP is a rare disorder caused by mutations within the ADAMTS-13 gene that results in the decreased or non‐functional production of ADAMTS-13. Acquired TTP is an autoimmune disorder caused by the development of autoantibodies to ADAMTS-13 that either inhibit enzyme activity or increase clearance of ADAMTS-13 from the circulation. Deficiency of ADAMTS-13 results in ultra large vWF multimers, which provokes aggregation of platelets leading to microvascular occlusion and damage resulting in the manifestation of TTP. TTP is a rare blood disorder, and most cases (~95%) are acquired resulting from reduced ADAMTS-13 enzyme activity due to autoantibodies. While the incidence of TTP is estimated between 2 to 11 per million people per year (often in young adult women), TTP has a mortality rate of >90% if not diagnosed and treated. Plasma exchange treatment reduces mortality to <20%; however, plasma exchange is not without serious risks itself. Among those who survive the initial acute episode 20% to 50% will relapse.

Although many publications represent <10% of ADAMTS-13 activity as a severe reduction, different cut-off levels have been suggested, as in the case of the drug Soliris. Atypical HUS (aHUS) is a disease often grouped under TTP, but is caused by a genetic defect in complement regulatory proteins which leads to ongoing complement activation, and currently eculizumab (Soliris®) is the only FDA-approved treatment for aHUS.  As described in the prescribing information for the drug, an ADAMTS-13 activity level of >5% was used as criteria to include subjects for treatment of aHUS. Ruling out TTP is strongly suggested before treatment with eculizumab. Disease classification based on clinical features alone can be unreliable and can result in inappropriate treatment or delay in the initiation of effective treatment. 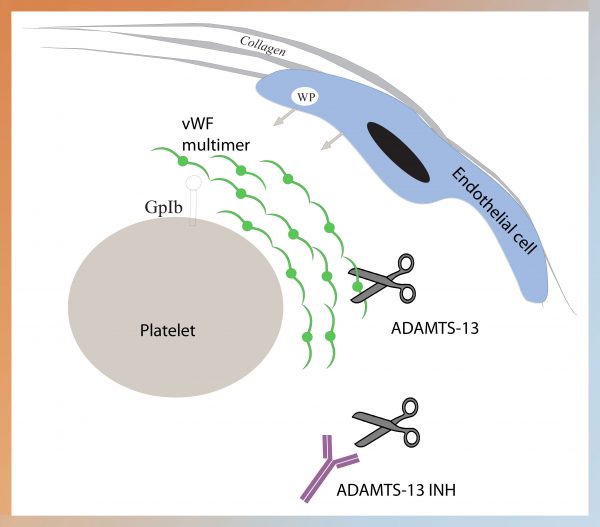 Fluorescent assays also have numerous limitations, such as interferences from plasma proteins such as hemoglobin and bilirubin. For example, bilirubin absorbs light at the same wavelengths as the chromophores in FRETS-vWF73, and hemoglobin absorbs at 550 nm and also directly inhibits ADAMTS-13 regardless of the assay method. There is some recent evidence that unconjugated bilirubin can directly inhibit ADAMTS-13 as well. It’s possible to lessen these issues by dilution, but this may result in limiting assay sensitivity, which is critical for ADAMTS-13 assays.

Liquid phase FRET assays are also subject to discrepancies because of cleavage of the ADAMTS-13 substrate (ie, vWF73) by other proteases. For example, the presence of elastase in a sample mixed with the substrate will result in cleavage leading to a measured fluorescent signal, when any peptidyl bond between the 2 fluorescent dyes is cleaved. While levels of ADAMTS-13 in the plasma sample will always vary depending on the disease condition (which may result in abnormal levels of many different proteases and other proteins), protease interference can be reduced during the actual assay if the ADAMTS-13 is first captured on a plate followed by washing before adding the FRET substrate. ELISA plate-based methods can reduce or eliminate these interferences, as the sample is washed away.

An additional alternative is to avoid fluorescent assays using a standard chromogenic ELISA method (HRP/TMB reagents) that requires standard ELISA equipment rather than a fluorescent reader. Peptide vWF substrates are still used but a unique method that captures the substrate on the plate and, with ADAMTS-13 from the sample, cleaves the peptide to expose a neo-epitope. This new epitope can be recognized by a specific antibody allowing ADAMTS-13 activity to be determined by ELISA.  A high sample dilution can avoid bilirubin and hemoglobin interference. In addition, protease interference is minimized using an antibody very specific to the ADAMTS-13 cleavage site (Tyr1605-Met1606), and most proteases (ie, elastase) cleave a different site (ie, M1606-V1607 or V1607-T1608). Only cathepsin G may have the same cleavage site. Using this type of assay, sensitivity down to 0.5% ADAMTS-13 activity can be reached.